How Baboons Choose Their Leaders

Patronage works in the Baboon World

Every baboon troop is led by an alpha who holds power until ousted by a challenger. Brute force makes you alpha among small-brained mammals like bovines, but in the primate world, power is won by trading favors. Baboons have curiously familiar ways of winning support. They share meat after a hunt. They groom the fur of influential troop-mates. They fight lions while their troop-mates climb up trees and watch. Patronage works. A baboon becomes alpha when his alliance is capable of overpowering the reigning baboon’s alliance.

But once an alpha baboon consolidates power, he starts dominating the troop’s food and mating opportunities. He only shares with his supporters. He demands more groomings from his troop-mates than he offers them.  If his troop-mates don’t like it, they can leave (which means instant death in the jaws of a lion); or they can support a challenger (which means more meat and mating opportunity if you’re on the winning side, and gaping wounds from the alpha’s huge incisors if you’re not lucky). 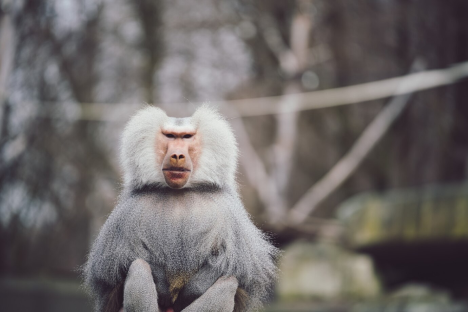 Female baboons have a dominance hierarchy of their own. An alpha female will grab food from her female troop-mates to favor her own child. But female baboons tend to follow their leader when foraging because she’s good at finding food and keeping the group safely together.

It behooves a baboon to choose its alpha wisely. Following a leader who fails to find food or repulse lions has harsh consequences in the state of nature. One’s genes are likely to get wiped out. Natural selection produced a brain that’s good at sizing up leaders and social alliances.

Yet baboons have realistic expectations about their leaders. They don’t expect the alpha to relieve them from the daily challenge of meeting their own needs. They keep foraging for food even though they get an occasional chunk from the alpha. They stay alert for lions even though they get help chasing them off from the alpha. Today’s baboons were naturally selected for their ability to meet their own survival needs. 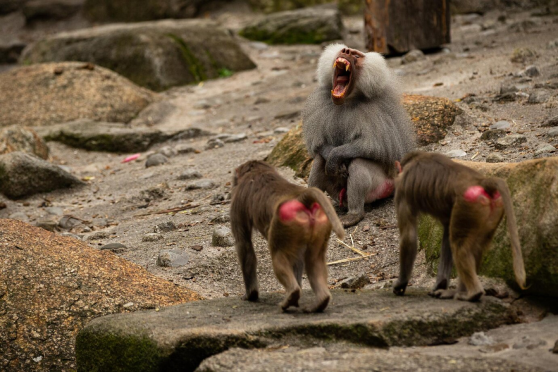 Researchers find high cortisol levels in troops whose alpha is facing a challenger. Stress hormones surge because conflicts flare up when dominance is contested. Eventually, power is consolidated, conflict dies down, and cortisol returns to normal. These eruptions are the price primates pay for the opportunity to choose sides in a power struggle instead of having fixed dominance hierarchies determined by butting heads, as smaller-brained species do.

Baboons don’t intellectualize about their preferences. They follow the patronage without illusions about the common good. That’s because feel-good brain chemicals are released when a mammal perceives food, protection, grooming, and mating opportunity. Neurochemicals pave neural pathways, so the baboon’s brain keeps associating the patron with the good feeling.

Humans have a much bigger cortex than other mammals. A big cortex can manage enough detail to build abstractions, such as words. But beneath the cortex is the “limbic system” that all mammals have in common. It wordlessly releases feel-good chemicals when it sees something good for survival. When you feel good about a leader, you may think your response is motivated by the information in your cortex. But your cortex scans for information that explains the neurochemistry already released by your limbic brain. We don’t realize this because the cortex generates verbal explanations for its conclusions and the limbic brain doesn’t. A big-brained human can always find words to explain it good feelings about a social alliance, but the words are not the source of impulse. We are not slaves to our mammalian impulses, but we must be aware of them in order to transcend them.

Want to read more about mammalian social alliances? You might like my book, I, Mammal: How to Make Peace with the Animal Urge for Social Power, or my recommended reading list.